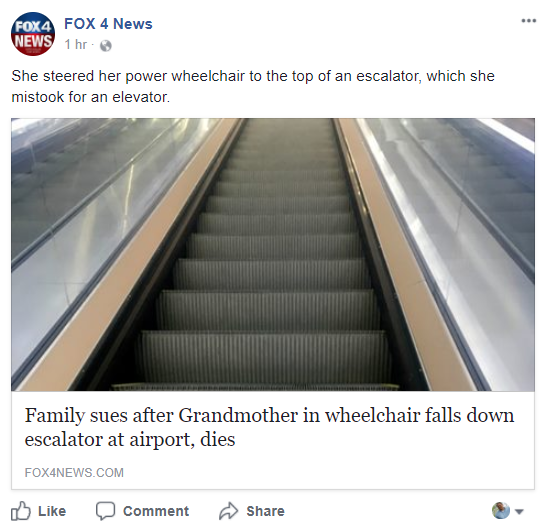 A friend sent me the above screen capture of a Facebook post. As you can see, the post reads, “She steered her power wheelchair to the top of an escalator, which she mistook for an elevator.” This is followed with, “Family sues after Grandmother in wheelchair falls down escalator at airport, dies.”

At first, I was bewildered. “How frivolous can you get?” I immediately thought to myself. As a personal injury attorney, frivolous lawsuits infuriate me. It is hard enough to convince a jury that my client is legitimately injured without new stories circulating about bad attorneys bringing ridiculous claims making it even more difficult. The Facebook commentators agreed: “Personal responsibility should be used. She was not forced to use the escalator, she chose to use it,” said one . Another read, “How do you confuse an escalator with an elevator?” This question was echoed by many.

Now, a media outlet would never post a misleading headline to drum up interest and outrage. Would they?

Of course they would! If you click on the link and read the story (a habit I wish all of us would resolve to do more of this new year), you find there is more to it than a family suing just because their grandmother “mistook an escalator for an elevator.”

More than likely, the grandmother was suffering from dementia or some similar mental illness, and was unable to take care of herself without supervision. This is similar to a child taking an unaccompanied flight – it is reasonable for the family to expect that the airline employees will monitor the child and keep him or her out of harm’s way. Likewise, it is reasonable for this family to expect Alaska Airline’s employees to watch over their grandmother and keep her out of harms way.

So it seems, in the effort to drum up a few more clicks, Fox News put out a story that stirs up outrage against personal injury attorneys. Unfortunately, many will only read the post and not the actual article. They will continue to believe that somewhere out there is an attorney suing because a woman mistook an escalator for an elevator. Undoubtedly, you will hear this as the punch line to another lawyer joke. And worst of all, the family left behind in their grief, will surely be called “gold diggers” by many.

If you want to read the article for yourself, then click here.